Nasty Christmas presents from our ex-neighbours

I had a great Christmas present this year.  My neighbours from hell left on the 19th of December. They were going to be evicted on the 24th but incredibly they found another place (which shows how easy is for people to rent a property) and decided to leave a week before.

However they left us with nasty consequences which I will outline later. But first a bit of background. Despite being reasonable with them and ask them repeatedly to refrain from their behaviour (burning off in the backyard – often with plastics and toxic material, playing loud music between 2 am and 7 am, revving their cars parked in the backyard so that toxic fumes came across etc.) they continued. Adding to this the fact that they were unable to communicate with each other quietly and without uttering ‘fuck’ or ‘c*nt’ every second word (which is not exactly the best example for out 11 year old).

So we complained to the Real Estate Agent (which did bugger all initially, washing his hands of the whole thing – and only acted when the landlord started to ask him to act), the Police and the Council.

One thing you learn about when you are in this predicament, you do get a ringourund. You call the police and while they have been considerate, they come to the place to ask the noise to be turned down but it really stops there. A couple of times police attended and the music was loud again after ten minutes. You ring the Council. But if they burn off during the weekend there isn’t anyone that can go and check. Officers did go and see during the week but of course this was when the neighbours were at work, so there was nothing to do. When we rang the emergency after hours number for the council they told us to call the EPA, the EPA told us that because it wasn’t a factory it was a council matter. One time when we hoped the could do something was when at 12.23 am on Saturday 21 November 2009, the neighbours lit a fire in their back yard and then proceeded to apply a gas or other highly flammable substance to the naked flames which created a series of loud explosions (3-4) that shook our house, and sent huge bright orange fire-balls into the sky. Other neighbours were so alarmed that they called the fire brigade, and two trucks with sirens blaring came to our street. The Fire Brigade served the neighbours with a warning, but had no power to do anything else.

But it was when we started to complain and ensure that all their nuisance activities were noted and reported that things started to get nasty. After we came back on a day out to celebrate our son’s birthday we saw that our letterbox was smashed out. The next night they shouted in front of our door ‘fuck the whole neighbourhood, they have no party …” (could not hear the next word/s) and then later we heard them say” … burn our house down, burn the next door neighbour’s house down, and the car that would be outside their house”

Then a couple of weeks later at 3:40 am they started to hit violently the party wall which separate our bedroom with one of theirs. The impact of the frenzied blows was so extreme that objects (lamps) in our bedroom which were in direct contact with the wall and nearby shelving vibrated with the blows. The noise sounded like a pile-driver, and was so loud and violent that it woke our son and Pene’s 82 year-old mother who were asleep in the room across the corridor. Later in the week they started to play music early in the morning and shortly thereafter we heard one of the tenants shout “good morning neighbours”, and then just after the music had started playing, we heard one of the tenants shout (play it) “louder, louder”. After the fire brigade left due to the fire incident above at 1.47 am, one of the neighbours came out of the house yelling ‘fuck each and every one of you’, and at 1.55 am was heard ranting ‘c*nts’ many times in our direction.

We had enough. And despite the information that their lease was going to finish in mid-January 2010, we wanted them out immediately. They were dangerous.

So we hassled the Real Estate Agent, we wrote again to the landlord and we wrote to the CEO and councillors of the City of Darebin that they were contravining the nuisance provisions of the Health Act. Then the Real Estate Agent pulled his finger out and initiated a VCAT hearing for eviction. I don’t know what happened but we were informed by the Real Estate Agent that even before this hearing the neighbours lease would terminate on the 24th of December. So they left, but without leaving their legacy of nastiness behind.

On the first night when they left we were mightily relieved and they left their front window open for everyone to see. We noticed that all they left an amplifier, an iPod and two bug speakers. The speakers drivers (where the sound comes out) were not facing the room but they were against the wall, so when they played loud music the sound would blast straight into our bedroom. Then we saw a coke bottle thrown into our front yard. but closer inspection showed that it was a home made bong (with water in it). 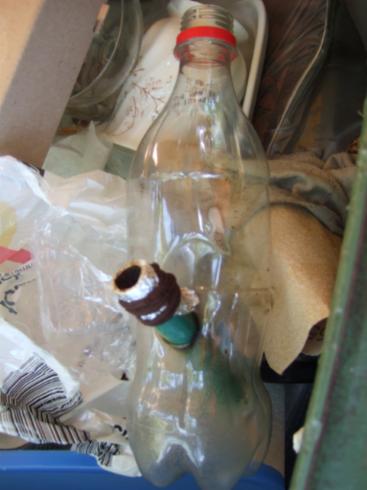 But worse was to come. When we came home on the 24th of December we noticed that the hedge in front of our house on their side had this white foam on it and many the leaves were brown. This is a hedge that has probably been part of the front yard of the house for decades and took years to grow to its current state. 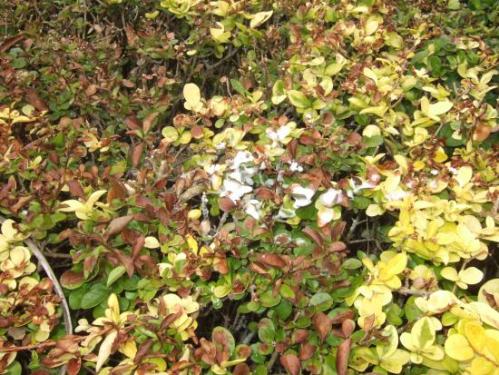 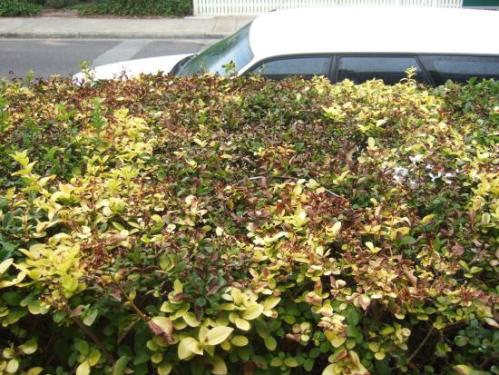 We suspect that the neighbours sprayed what must have been fire retardant on it. My partner’s brother, who is an horticulturist told us that this substance has a very strong detergent that defoliates plants. The poor hedge is becoming sicker and let’s hope that it will survive the ordeal. This is the pictures I took today. 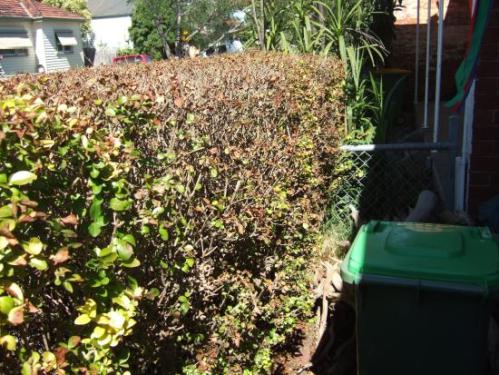 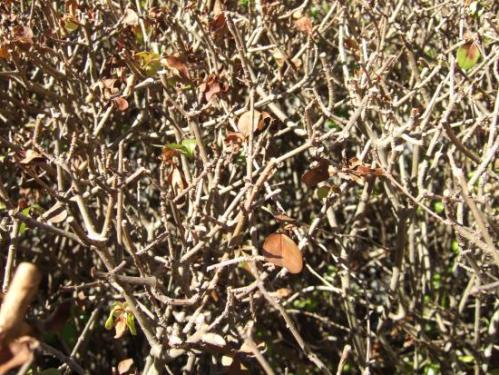 Fortunately they didn’t do anything to the other side of the hedge, but this can show how the hedge should look like 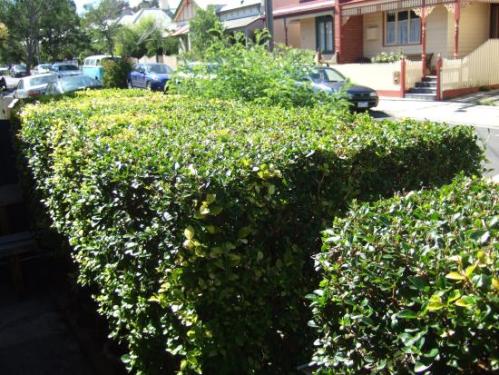 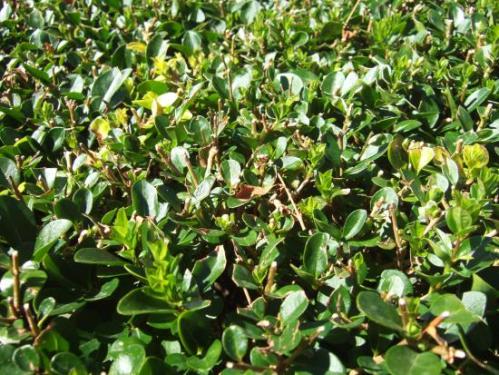 One of the hellebores we planted under the hedge must have got a full blast and is now dead. 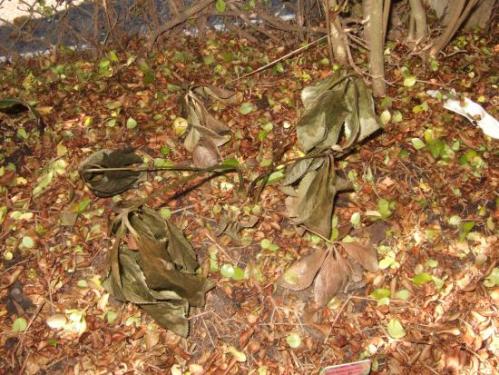 Our car also got damaged.

We have shown this to the Northcote Police that has confirmed that the evidence showed that a levering implement like a screwdriver or something like that was used.

Of course we can’t prove anything. However the coincidence of pissed off tenants that were evicted before their lease expired, their previous behaviour and attitude towards us and the fact that these events occurred on the last day of them being allowed on the property is not insignificant.

So while we had a lovely Christmas in our backyard without smoke, obsenities and revving of cars and associated fumes, this has left a bitter taste in our mouth.

All I can say is while the car can be fixed, and hopefully the hedge will recover those tenants are going to remain fuckwits forever.

2 responses to “Nasty Christmas presents from our ex-neighbours”