No more Royal Commission show trials – We need the politics of positiveness.

I haven’t written much about politics in my blog. Basically because there so much of it about and I really haven’t anything original that can contribute to the debate. Especially if it comes form professional political analysts.

However there is one thing that I feel compelled to say. This refers to the Royal Commission into Trade Unions. There is no question that it is politically motivated Royal Commission created by this government to inflict political damage to the Labor Party and the labour movement as a whole. Many commentators have said so, even though they can’t resist amplifying the damage nevertheless in their approach to the story.

Overall I am in agreement with what Kristina Keneally has said on the whole matter. 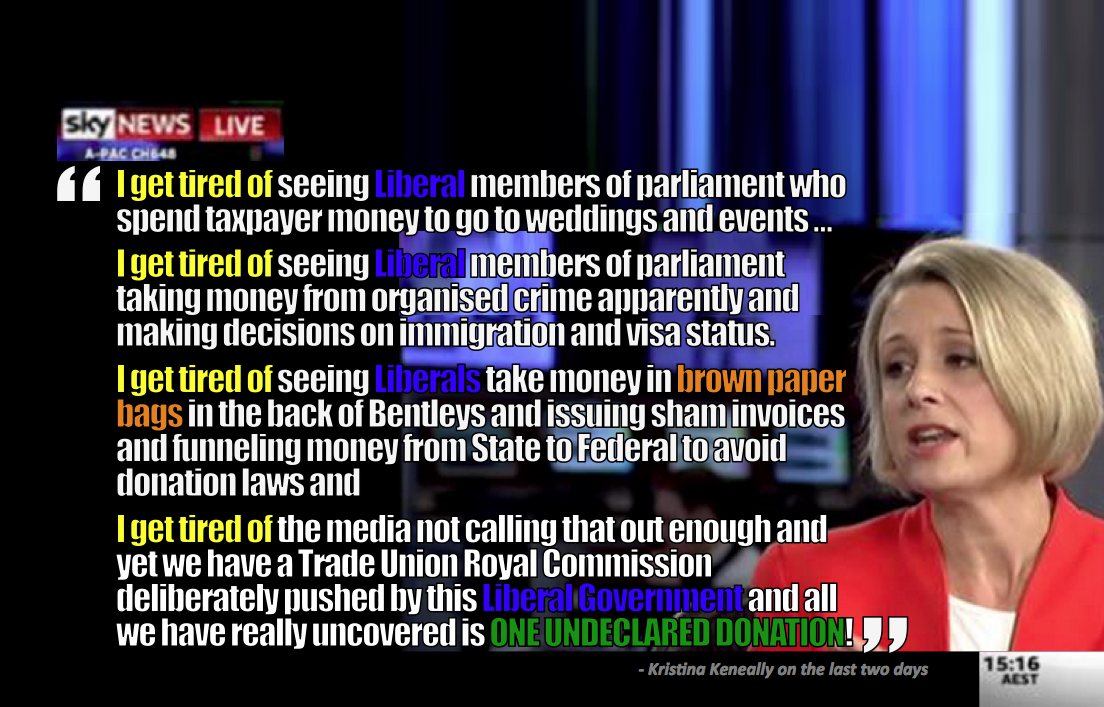 But I also have to say that I am not a big fan of Shorten either. There is a great article by Jeff Sparrow that explains much better that I could my opinions about the opposition leader.

The royal commission’s an obvious political stunt, a manoeuvre designed to generate footage of yet another Labor leader grilled by lawyers in a courtroom setting. Will it damage Shorten’s political standing? Who knows.

He certainly came across as an uninspiring and slightly shifty bureaucrat, concerned more about his ambitions than anything else – but, then again, that’s pretty much the persona with which we’re familiar from his parliamentary career.

I think many of us hope for a Shorten’s win just to get rid of Abbott. But it is an uninspiring choice.  And the current ‘me too’ positions on things such as asylum seekers, the Telecommunications (Interception and Access) Amendment (Data Retention) Bill, and even voting against protecting the Liverpool Plains doesn’t give much sense of a different vision.

The ALP is now for same sex marriage but that position has arrived when they realised that many in the government were of the same opinion and I suspect are now using this to maximise the discomfort of the Government.

And this is where the political discourse has got to.  There’s no need for me to write a about the disenchantment in the electorate feels at the moment.  Waleed Ali has written about it a couple of days ago and he explains it much better than I could.

What I want to say is that when the ALP returns to government (may not be next election though) it should resist the temptation to set up its own ‘Royal Commission’ as a revenge act.  Kim Carr has already flagged that this may be the case.

Kim Carr says Labor will be under “enormous pressure” to respond to #TURC “precedent” when next in office #auspol pic.twitter.com/yVEBxBFK9l

This came from a statement  on the ABC’s PM program.

KIM CARR: One can only wonder where it leads Australia? We are turning a very dark corner here when it comes to the use of state power in an attempt to silence political opponents.

KIM CARR: The Labor Party, when it returns to office, will be under incredible pressure to respond to this precedent. It is the sort of issue that would make a very good royal commission, such as inquiries into how the Liberal Party funds its operations. Its fundraising arm has of course been subject to considerable attention in recent times, particularly with its links with the mafia, and I can see a circumstance where a Labor government would be under pressure to respond to the precedent that Mr Abbott has set with his royal commission.

Under pressure?  From whom?  I am sure that Labor supporters would love to see high level officials squirm and be under pressure as they have done to Rudd, Gillard and Shorten.  But I would urge the ALP to resist this tit for tat.

Mahatma Ghandi is attributed to have said “An eye for an eye leaves the whole world blind”.  It is time to raise the politics away from the negativity that it find itself into.

The politics is so negative, so imbued with the narrative of threat of fear that it casts a pall over the whole Australian society.

Instead of looking at challenges with an outlook that we can deal with them, intelligently and capably and positively we are all stuck in this negative swamp.

It’s time to get out of the swamp.  Forget getting back to the Liberals about their Trade Union Royal Commission.  It’s time to see ourselves as a successful positive society that thrives of knowledge, ability and compassion rather than being cajoled into fear and inaction and anger by a narrative wanting us to be there for their political advantage.

Someone already faced an incumbent leader who was using fear and war to win power.  He won by offering positiveness and hope.  It can be done.

Filed under Politics and Current Affairs