Why the Matildas being shown on Channel 7 is good news.

Just hours before the W-League grand final it was announced that Channel 7 (through its digital channel 7Mate) will be showing the Olympic qualifiers for The Matildas, the Women National Football team.

The news was generally enthusiastically welcomed by football fans, even by those from other TV channels that would have normally shown the matches.

@JimWilsonTV what a fabulous announcement Jim! Congratulations to the entire Channel 7 team for this initiative. Such a great step.

However – as usual when it comes to Association Football in Australia – some were much less impressed.  One reason was that Channel 7 is the Olympic broadcaster and was always going to show them anyway.

Well, I disagree.  Qualifiers do not necessarily get broadcasted. Can’t recall these being done before, and I even can’t recall the Opals having their matches broadcasted last year for instance. (I may be wrong).

If we follow the argument that ‘these games were always to be broadcast’ then Channel 7 would have done so for the Olyroos as well.  Maybe they weren’t because they were played at a very unfriendly Australian Eastern Summer Time (around 3.30am) unlike the Matildas which are at much more approachable times around 9.30ish.

But I would like to think that the commercial Olympics broadcaster thought it worth while enough to show them.

And my recollection is that football matches are not shown in their entirety at the Olympics anyway.  They may be the most watched event at the Olympics worldwide but I don’t think this is the case in Australia, or at least the producers think so considering the amount of space dedicated to them in Olympic coverage.

OK.  I do think that the matches will not exactly rate through the roof.  But I don’t think the argument that ‘it’s one of those digital channels so people won’t watch it’ really holds water.

The success of the Women Big Bash League has shown that people will watch women sport on those channels.

But what about the A-League on SBS2? I hear you cry?  Debate has been going on whether the poor ratings the A-League is having for its Friday night matches is because is on SBS2 rather than SBS1.  Well,  recent ratings suggest that since matches have been shown on SBS2 the viewership has decreased by 110,000 per week, but apart from that the fact is that the A-League games have been poorly promoted by SBS as a whole.

And also, whether we like it or not, commercial TV has a bigger reach even with their digital channels.  The example of this was last night during the Australian Open final, an event which will certainly have very high ratings, where the Matildas qualifiers were advertised.  In my twitter feed I could read tweets of  people I follow who are dedicated football fans finding for the first time this was happening.  If these ads alerted football fans that the Matildas were going to be shown on 7Mate, imagine how many more people be aware of the fact being advertised by a commercial broadcaster in a high rating show.

Not all of people would be interested of course, but a commercial broadcaster ultimately has to sell broadcast time to advertisers.  And even if it is on a low rating channel like 7Mate and with a relatively (and arguably) a sport which does not have mass following commercial channels are not charities.  It is in its interest to let potential viewers know that an event is on and ensure the maximum number of people watch it.  This is a double edged sword of course as something than doesn’t rate will be mercilessly cut, but on the other hand it will be promoted (at the start at least). 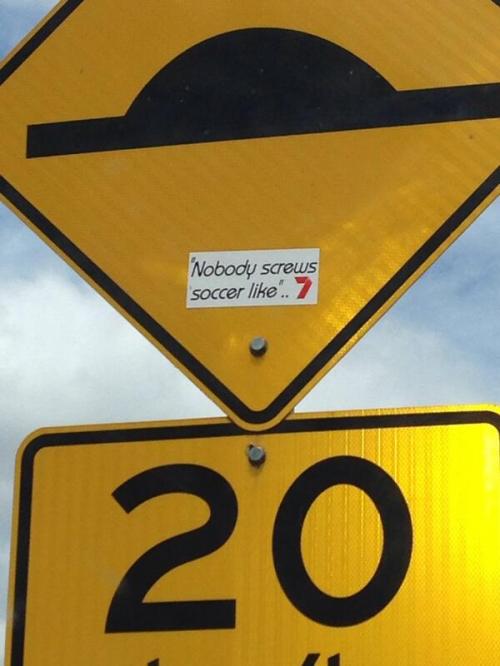 Finally is the long held suspicion held by many in the football community about Channel 7.

It is true that in 1998 when the television rights to the former National Soccer League were sold to Channel Seven at one point limited coverage on their main channel to one hour of highlights a week shown after mid-night.

To add fuel to the fire there was a revelation in a Federal Court case about sport TV rights that the executive in charge of C7, Steven Wise, lamented in one email that the AFL was not giving Seven credit that “we have secured the soccer rights and suffocated the sport, much to the chagrin of its supporters (by giving AFL games preference)”.

But 1998 was a long time ago.  Pretty Fly (For a White Guy) by The Offspring topped Triple J Hottest 100 and France won against Brazil 3–0 in the football World Cup final.

Things have changed.  Soccer is in a very different position that it was before the turn of the century.  I know there is a belief that Channel 7 is an AFL station and will do its utmost to thwart the growth of soccer in Australia, but as a commercial channel its decisions will be dictated by the bottom line, rather than some evil conspiracy.

So as a football supporter I am delighted that the Women National Football Team is getting more exposure, something it thoroughly deserves.  Now all the teams has to do is to qualify for the Olympics…fingers crossed!