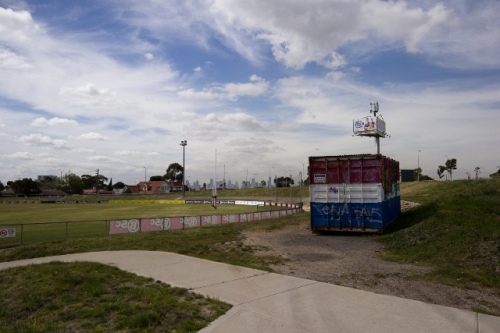 There is a positive vibe in Melbourne today.

The Western Bulldogs (aka Footscray) have won a Premiership after 62 years, and the majority of Melbourne footy fans were hoping the ‘Sons of the West’ would finally lift the cup.  I believe there are some lessons in this for the FFA.

The FFA when instituted the A-League it spoke of ‘Old soccer, new football’.  This was an attempt of saying to potential fans that the old days of soccer on small grounds played by teams with predominantly Non English Speaking Background (NESB) heritage in the NSL were over and Association Football would be played by new teams with no apparent affiliation to any particular community.

Traditional VFL teams such as South Melbourne and Fitzroy were exported and re-branded as Sydney Swans and Brisbane Bears (later Lions). 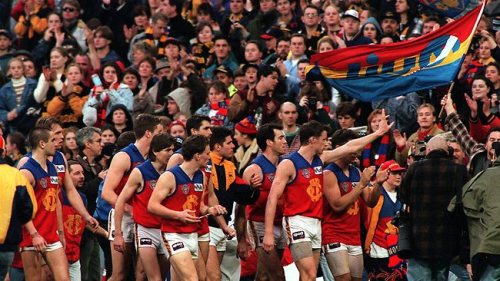 Fitzroy farewell their fans after their last match as AFL team. 25/8/1996

This caused consternation amongst their fans who saw their teams ripped away from them.  But the AFL continued to thrive, and it is not an organisation to give up easily, and it has the money and the power to go for the long haul and after the first bumpy years both the Sydney Swans and Brisbane Lions went on to win premierships and establish themselves in their new cities.

But for many Victorian supporters these teams, in parts of Australia where Australian Rules Football was not part of the culture, were seen as a bit on an imposition.  They were seen as a business strategy by the AFL, rather because they were clamoured by people in NSW and Queensland.

This was the case especially for the Greater Western Sydney Giants.  While Melbourne fans may accept now that Sydney has an AFL team, many see the creation of the GWS as a purely business enterprise to introduce Australian Rules into an area of economic of demographic  growth.  It is seen as a purely artificial creation by the AFL who has subsidised them over $100m, gifted them No 1 draft choices, salary cap concessions and exclusive access to NSW regions to put them in a position where they could have made the grand final after five years.

So ironically, some of the antipathy that Association Football supporters feel about GWS is somewhat also shared by Victorian AFL fans

Why the Giant-sized hate for GWS?https://t.co/T43KsEy2T2

I think that one of the main reasons why so many Melbourne AFL fans were so supportive of the Western Bulldogs, was not only because they didn’t win a premiership for yonks, but also because it is one of the AFL teams that imbues the old feelings of a team-one community.

Other ‘bigger’ teams such as Collingwood, Carlton and Hawthorn have lost a sense of geographic connection, while (with the exception of Geelong, that represents a separate city altogether) Western Bulldogs is a traditional VFL/AFL team that still has a strong connection to its Western suburbs origins.  And that why the finals against the Sydney Swans and especially the Greater Western Sydney Giants took on an extra dimension.  Here was a traditional team, supported by mainly working class people from a working class area, who haven’t won for yonks.  Who like South Melbourne and Fitzroy was almost obliterated by the AFL  but managed to survive through the resolve of its fans against the odds winning a premiership against the AFL ‘creations’ to benefit its corporate strategy.

Now, I know there are plenty of genuine Sydney Swans and GWS supporters out there.  I am just expressing what I believe is a very Melbourne sentiment.

For people who want to know who exactly Giants fans look like, I’ve written a Medium post about it. https://t.co/4IbvVsDJfE

But as I will reiterate later, sport is often more based on emotion and perception than reality.

What this has to do with the A-League?

I think there are some parallels with teams such as GWS, Sydney Swans and Brisbane Roar and most A-League teams.  All of them share the fact that they were all a creation of their respective bodies, the FFA and the AFL.

They were created specifically as a strategy rather than organically from members and a community.

So while a club like GWS has more in common in its origins with a Melbourne City, what the Western Bulldogs would have more in common as an Association Football equivalent in that part of Melbourne?

The answer are teams such Footscray  JUST (no longer in existence) and Melbourne Knights.  The connection was even acknowledged by the Knights in a tweet before the AFL Grand Final.

But now we arrive at the elephant in the room, where angels fear to tread.  The fact that teams like Footscray JUST and Melbourne Knights are not artificial constructions – they were created by a community, and that community is predominantly from a certain part of Europe.

I can go through all the arguments I’ve had on this subject before.  The main one that it really doesn’t matter whether a team was created by Australians who happen to be of Croatian, or Greek heritage no more than those from Ireland or Scotland.  But the fact is that following a team is in the realm of emotion, not rationality.  I know of committed Association Football fans who didn’t give a hoot who created the team, they wanted to follow football.  The evidence remains whether there were enough to sustain a competition.  Beside emotion, we are dealing with perception rather than reality.  And while true believers knew that many teams were broadening from their traditional origins didn’t matter if the perception was there amongst some potential Association Football fans.

So the A-League was created with no or little NESB heritage.  This was construed as appeasing xenophobia by some traditional team supporters.  It may also be understandablein marketing terms (remember we are dealing with perception) that the FFA wanted a ‘clean break’ from a competition that perhaps undeservedly didn’t have a great reputation.  But this placed those communities that fostered and nurtured the sport for years offside, and adding to the injury when they were allowed to participate in a nation wide competition with the FFA Cup, the FFA rushed to ensure they wouldn’t display any ‘ethnicity’ through the National Club Identity Policy    (NCIP)

Moving ahead. Traditional teams are an asset, not something to exclude

One thing that the premiership by the Western Bulldogs have shown is that true community teams create a buzz.  The history, the stories of people who have supported the team for generations etc.  These stories are powerful.  The fact remains that only traditional teams such as the Melbourne Knights, South Melbourne or Sydney Olympic can deliver these type of stories when Melbourne Victory or SydneyFC can’t.

I saw a bit of that when The Age sent one of its most lyrical writers about Australian Rules Football to write about a FFA Cup match.  If anyone reads Martin Flanagan he writes often of the history of Aussie Rules and the AFL, it’s indigenous traditions and past.  It was fascinating reading something similar about Association Football.

The main feeling you get about South Springvale Football Club is its closeness.  Its star striker, 20-year-old Hameed Ali, is a very quiet young man.  Asked what he likes about the club, he says, “They take such good care of you.” Alex Florea, the young man who arrives for training wearing crystal pendants and medallions around his neck to ward off negative energies, puts it this way: “When you love something, you do it unconditionally. You don’t expect anything in return. That’s how it is here – we don’t even get paid.”

These are the ‘Western Bulldogs’ type of stories that only truly community clubs can generate.

While a break from the past may have been necessary twelve years ago, we have now moved on where persisting in excluding traditional teams is illogical and in fact is a loss to the advancement of football in Australia.

Communities that love football and have nurtured it for the past half a century is an asset that has to be included and made felt welcome by the FFA.  The creation of a competition where current A-League teams and traditional teams feel are part of something all together through a promotion and relegation system can create something unique in the Australian sporting landscape.

The FFA should  not be scared of identities that are NESB.  As a first step it should abandon the NCIP, they will see that the sky will not fall down.  And then institute a plan for a promotion/relegation system that is viable and sustainable.

Then also Association Football in Australia can have its good vibe stories.