Time for football fans to embrace the “S” word.

Words are powerful, and they can carry a lot of emotional impact. Words have meaning, what a word when is used to intend, express or signify? What that word represent, or to stand for? When it is used, what does it refer to? These questions may seem esoteric. They are fundamental to the Philosophy of Language Philosophy of Language but we use these parameters every day unconsciously.

Arguably, one of the most powerful words among the Association Football followers is the word ‘Soccer’.

This is an issue in countries such as Australia and the USA where the term ‘football’ is being used for other codes such as gridiron and Australian Rules.

I can’t say when this became an issue. My recollection is that this started around the time when the Crawford Report came out and Association Football pushed the reboot button. I think also that Johnny Warren advocated for this change.

The term was invented in English public schools [1] and it is thought that it was an abbreviation of ‘Association’ as in the early days of codification of the game it was described as “Association Football” So ‘Association’ –> ‘Assoc.’ –> ‘Soccer’.

So at that stage, the word ‘soccer’ had no particular emotional loading. In countries such as New Zealand, Australia, and the United States other codes had usurped the name “football”. In Australia, the situation was similar, with both rugby and Australian rules laying claim to the name. In the United States, it was gridiron.

The word ‘soccer’ can be seen as a template example when an innocuous word becomes emotionally loaded. From being simply a way to differentiate a different code of football, it became (or was perceived to be) a way to marginalise the sport in these countries. I remember reading a letter in The Age when the Football Federation of Australia was formed. The Age at that stage decided to call the round ball code in Australia ‘football’ (something now they have abandoned, calling it soccer again) and one AFL supporters wrote a letter protesting that football should be the preserve of Aussie Rules writing: “remember that whatever you want to call your sport you will always be soccer in this country”.

This was the type of opinion that riled Association Football supporters. The word ‘soccer’ was being used to put the code in its place, and that place was a subservient one to Australian Rules and Rugby League. Added to this was that in most parts of the world the term of the round code is ‘football’, why should Australia be any different? Many Association Football supporters felt that if anything Aussie Rules and Rugby League appropriated something that wasn’t theirs. 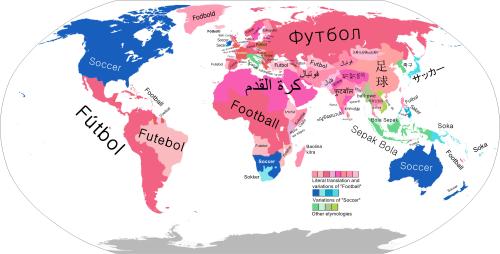 The word became weaponised when the A-League started with the slogan “Old soccer New football” to signify a new era in the sport in Australia. And the successor of Soccer Australia became the Football Federation of Australia.

The football vs soccer debate is still going on. Inevitably if a journalist or even someone writing in social media using soccer will get a rebuke about being football.

My argument is, what about if we use ‘soccer’ powerfully?

Wanting to use ‘football’ instead of ‘soccer’ perpetuates disempowerment

For me, the insistence of using football instead of soccer perpetuates the sense of inferiority that Association Football fans have, instead of overcoming it.

As long as we get irritated by a soccerphobe using ‘soccer’, the soccerphobe has the power over Association football fans to rile us. By wanting to eliminate the word soccer we have unwittingly given a weapon to soccerphobe against us.

It is a bit like in the playground. How does a school bully know how to upset their victims? They hone into something they know its powerful. It can be assured that is a bully’s victims asks “Stop calling me fat!” the bully will call the victim fat as much as they can.

By wanting soccer not being used we have given that word a lot of power, a power that really it’s not warranted.

Wanting to use ‘football’ instead of ‘soccer’ perpetuates disempowerment

So let’s flip this over. Let’s be proud of the term soccer for Association Football. Don’t allow the anti-soccer people have power by using this word.

Something similar has happened before. For instance, the word wog has now being used by wogs themselves and lost lots of its power as a weapon to offend. Look for instance ‘Wogs out of work’ or ‘Wogboy’ or ‘Superwog’.

On a more serious note the word ‘queer’ originally a term used in a derogatory sense by homophobes has now being embraced by some in the LGBTIQ community (that is what the Q stands in the acronym) and has completely changed the meaning. It can be described as a broad umbrella term for anyone who may identify as being either gender, sexually and/or bodily diverse. [2] A word that was used as a weapon against the LGBTIQ community now is used to describe themselves.

So while some football…ehm soccer supporters rile against the S word, I think we should embrace it. By acknowledging it, make it our own we will strip it from any negative connotation and the soccerphobes will lose it as a weapon.

Soccer is ours and refers uniquely to our game. Let the other codes share the word football by themselves.

2 responses to “Time for football fans to embrace the “S” word.”