Flares and behaviour at the soccer. The elephant in the stands 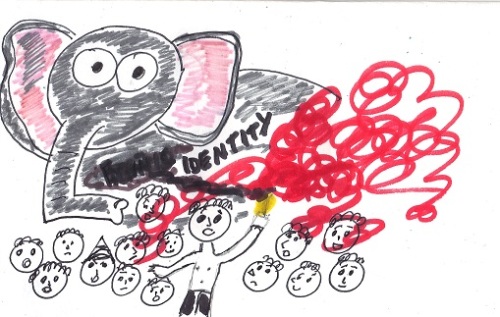 Besides I’ve written about this many time before:

So I didn’t want to repeat myself.  But one thing that I think most commentators missed was the issue of identity.

Maybe because tying the this issue to soccer has become taboo.  This is what those dinosaur AFL/NRL troglodytes do, don’t they? We don’t want to be accused to use the ‘wogball’ card.

However that would be a really shallow way to look into it.  The reason why flares are used and persist to be used by a minority is, I think, partly bound in a mix of rebellion, assertive masculinity and asserting an identity which is outside what it is perceived to be the mainstream.

Sometimes when I have raised this issues before I have been accused of being an apologist for the flare rippers.  Nothing is further from the truth.  Just read the previous posts, and ask some original members of the Melbourne Victory fan forum where I have argued against flares even before the start of the A-League.  However I think that just saying flares are illegal and should not be brought to the stadium really does not help the debate or even perhaps how to address the problem.  Lots of things are illegal. Driving way out the speed limit or the legal alcohol limit, taking recreational drugs etc. an people still do it.  Finding reasons why this behaviour occur ans why it persists despite threats of sanctions against their teams is essential if we want to address the problem.

What I think it is very important to note is that while active fans are there to support the team, for many the more emotional investment is in the support group itself, than the team.  This does not mean the whole of the active group, just the one who identifies with the type of rebellious behaviour which involves things like flares.  Psychologists have studied different forms of social identification since the 1960’s where the perception of oneness is to belong to some human aggregate.  So in the case the fans who rebel, they may define themselves in terms of the groups they belong to.  They perceive themselves as an actual member of the group and as a consequence perceive the fate of the group as their own.

This is football support mate, Australia can like it or dump it

(with apologies to the great late David Bowie)

Go around social media associated with football and eventually the idea of the ultra comes up.

These are distributed around and seen as an exciting way to support football and a demonstration about how football is supported in what it is considered overseas.

The fact that flares are considered ‘not things that are accepted in Australia’ and are illegal bounds together two things that are attractive to the supporter who takes flares in the ground.  The excitement of transgression, and the fact that it is a practical demonstration of rebellion against what is perceived as a mainstream Australian way to behave within a sport.

And here is where the tension occurs.  Comments of non football supporters against flares is that that sort of behaviour is unknown at the AFL or NRL is partly an attraction to those who rip flares.  The flare is a symbol that they don’t want to be white picket mainstream Australia, that they don’t want to support the game as the AFL or NRL is supported and that (as those tweets above demonstrate) that is the way football is supported around the world and if white picket mainstream Australia doesn’t like it they can shove it.  Families won’t come to the game? They don’t care.   They could be quite happy to have 2000 people instead on 30,000 if all can rip flares and being ultras.

My real concerns over the flare issue is not so much as the ripping of flares itself, but rather the way in which the Australian establishment is using it to whip the active support of our football teams into being good little boys and girls, to sit quietly and perhaps, but not too loudly, cheer on our team. If you doubt this, the support, of the supporters whom in many ways make the atmosphere at matches, by our club owners is not to be found anywhere within the media. Look at the nonsense of senior police stating they will stop games if flares are ripped, what a load of stupid rhetoric from the establishment. A pre-game news item on one of Melbourne’s major channels yesterday showed Victory supporters being harassed by TV cameras, with people stating don’t film me and pushing cameras away. Cut to lovely little thing commenting, and she says that the police took a statement from her and charges may be laid, not against the intrusion of civil liberties, but against the supporters for standing up for their rights.

I am totally sick of this put down of legitimate ways of supporting my team by the establishment. It must stop now. We mustn’t let those in power take our game away from us and make it little more than a mini Australian Rules type sport, where at least the ticket holding members do have a say on how the club is run. If me turning a blind eye to flares helps in keeping our football what it should be, so be it, I will.  And finally, I will not stop asking the black clothed, gun toting, police at our games why they are not out catching real criminals.

You can see here how difficult it is to modify the behaviour.  Punishment will only increase their sense of being ‘persecuted’ by the mainstream Australia that ‘fear football’ and the way that it is supported.  Collective punishment has the risk of increasing the sympathy towards the flare rippers as the number of those feeling the persecution will increase.  The negative commentary of journalists that are aligned with other codes such as Rebecca Wilson, Tom Elliot or Rita Panahi increase the perception that the other codes want to destroy football and the way it is supported and should not be listened to.  Unlike the FFA that betrays real football and  is servile to these anti-football sentiments,  wanting to turn support as a wishy-washy AFL/NRL type by trying to eliminate them.

Some have commented that these are not fans of the team but are there for themselves.  This could be true.  If that sense of belonging to a group (even as a sub-group within the total active support cohort as a whole) the personal desire to rebel is stronger than the loyalty to the team it is possible that the urge to act in a certain way may override any concern their action may have on the team.

That is why this is such as difficult issue to address and to resolve.  Two years ago I offered some suggestions. Basically one way would be for the support to still be outside the ‘mainstream Australian’ to satisfy the desire to differentiate but by using safer options using streamers, drums, balloons etc.  This could be combined with some approved safe pyrotechnic display.

For the game to progress this is certainly an issue that we need to resolve.  as I said two years ago, the best thing is that one day we will develop our own way to support football which is not only safe and edgy at the same time, but it is uniquely Australian and recognised around the world as such.  But we have to work at it. In good faith.