Blogging is not in anymore

I have been thinking how I am not blogging as much anymore.

And lo and behold I came across an article that listed one by one all the reasons why I don’t come here to pour my thoughts as much.  This link was provided by a new blog by the journalist Annabel Crabb, who was wondering  whether she was starting a blog when everyone else were abandoning theirs.  Of course Ms. Crabb is a different kettle of fish (sorry….I’ll get my coat) ahem… by the fact that she is a paid journalist and her job is to give analysis of events, while the majority of blogger did it as a hobby, and if there isn’t any major focus it is easy to just let it lapse.

Going back to the article it cites why blogs are fewer than before and many are inactive.

”Microblogging platforms such as Tumblr have been a great success because these sites tend to be used by people re-sharing images and quotes, rather than writing high-quality, in-depth blog posts,” Experian’s Matt Glasner says.

Who has the time and patience to pore over a 500-page critique on the refugee crisis when you can spit out a quick status update on Facebook or a witty 140-character tweet?

This is true.  But for me is also the fact that life, and my motivations and interests have moved on.  I never intended or wanted my blog to be read by millions, and it was really a way for me to place in order many of my thoughts in some sort of order, and I often wrote thinking no one would read it.  On the other hand I know that people that I know have read this blog and this sort of stops me from being outlandish and maybe go over the top in case I risk offending someone.
Believe or not I have been blogging almost continuously for some time.  I can’t pinpoint the date when I started (as my first blog’s host went belly up and I lost all my posts) but In do remember it was when Simon Crean was opposition leader so it must have been in 2003.  And that’s the other tale.  When I started blogging I wanted to do something a bit different, something that would make it interesting to read. So my intention was to comment of ALP politics from the view of a humble rank and file member (my first blog’s name was Rank and Vile..ha ha ha hilarious).  But slowly my interest in the ALP and then mainstream politics started to wane until I lapsed as an ALP member.  I still continued to write about politics but I always found that there were other bloggers that were writing what I thought much better.  Now I am basically fairly disinterested in mainstream politics altogether.  So that’s not a huge topic of conversation fro me anymore.
The other passion is football (aka soccer).  I have written about it, but I am absolutely ignorant about tactics, systems and players.  My main interest is how the sport is being seen as a foreign sport, and how it somehow allows the anxiety of many Australians about ‘foreign’ cultures to come out without the risk of sounding xenophobic (which it is).  But you can write so much about that without repeating the same argument.
So I could turn this blog into a reflection of being a cantankerous middle age men, which I am becoming.  But really, unless you are a skilled writer it is better to read professionals in places like the ‘Good Weekender’ in The Age which do a much better job.
So where to with this blog?  I am not really sure.  After all this years I would feel sad to just abandon it.  Although it would be also be wrong to keep it barely alive through false pretenses.

What I want for Christmas. 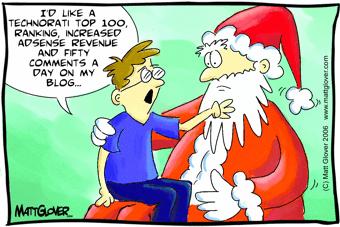 If you are not into Australian political blogging you would have missed the blogstorm that has happened today.  I won’t go into detail because other blogs have by now extensively covered what has happened.  Tobias Ziegler writes:

Even if you haven’t read his blog, if you followed the media coverage of the election campaign there’s a pretty good chance you know about Grog’s Gamut.   He’s the pseudonymous blogger whose pointed critique of the lack of policy questions from the press pack drew a lot of attention and sparked a debate, with journos and media bosses such as the ABC’s Mark Scott weighing in. Now, The Australian has deemed his identity to be news, and they also seem to have decided that public servants aren’t entitled to hold political opinions.

James Massola wrote the story which is titled: “Controversial political blogger unmasked as Federal Public servant” GASP! SHOCK! An Australian citizen has the temerity to express an opinion.  Let’s give Massola the benefit of the doubt that he didn’t write the headline, but the way it is constructed tells a lot about the way The Australian sees this.  First of all there is nothing ‘controversial’ about Grog’s blogs.  I guess they would be if you live in a conservative Abbott-loving world, which of course  The Australian is.  But a lot of what Grogs was writing about was on his frustration on how the media covered the election from a Labor supporter perspective.  Now if supporting the main centre left party in a democratic country is ‘controversial’ it show that The Australian has gone to the right wing pixies when it comes to its political positions.

The other thing is that Grog is a public servant and as such shouldn’t express his views.  I don’t know why public servants should be political eunuchs?  You just lose your right of expressing an opinion because you are employed by the government?  Of course there should be limits on how ‘political’ a public servant should be, especially if they are in senior positions and if their public opinion would show that that person is unable to perform a balanced advisory function.  If Ken Henry started a blog saying that Joe Hockey is a dickhead we would have a problem, but as far as I can discern Grog wasn’t in that position.

You can take the apolitical public service too far.  In Victoria, when Jeff Kennett was Premier I was an active member of the ALP and a public servant.  I hated that government with a passion.  It was arrogant, it had a disregard for communities and of course the public service.  I actively worked for its demise, even got a couple of letter published in the paper, so was I breaching some sort of code?  I was situated in such a low level in the Public Service that it really didn’t matter (I think that my position description was ‘shit kicker’) but if we extend the ‘apolitical’ public service dictum to its extent then even Joe at filing cannot say anything publicly about a Premier or a Prime Minister.

No, I think that the reason for the outing is another one.  For many years some journalists got a bit prickly that bloggers were getting attention.  I mean, why take notice of the opinions of these amateur upstarts?  Journalists get paid for their opinions, so even if they are absolute drivel they are thus much more important than any writing which appears online on free blog software.  So until bloggers are unread and insignificant then they can be ignored, but if someone like Mark Scott take notice, well then that’s it.  You should be outed and named.  You want to play big journalist?  Then be like us and tell us who you are.

What it is forgotten here is that unlike journalists, that are paid by telling us their opinion, bloggers do this (and often better) for free.  They are not paid and therefore they can remain anonymous all they like.  If a heavy media person takes notice that’s great, but that doesn’t mean that someone who writes for fun and in its own time should have his or her identity revealed if they don’t want to disclose it.  Poor show.

Filed under Politics and Current Affairs

I haven’t been blogging recently for a number of reasons. Firstly the demise of my server took some wind out of my sails. It was the second time it happened and to start all over again (although I did save most of my posts this time) it sort of deflated me.

Also while I really don’t care whether anyone reads this or not, I do wonder who is out there. But mostly I wonder whether the days of the humble solo blogger is numbered, if not over already.

Look at the most read blogs like Larvatus Prodeo and Club Troppo are written by a number of contributors rather than one. The same has happened to football bloggers where many have shifted from their own blogs to write on website such as The Roar.

Of course it makes sense. Being in a blog with many contributors means that you don’t have to keep up the blog all by yourself and there are many more readers.

I guess there may be also more pressure to write good stuff all the time as you don’t want to ‘let the team down’.

Me? I’ll continue here. As I said doesn’t matter if I write stuff that only I will read. A bit like useless pottering in a shed. It is ultimately a bit of a hobby and a diversion from everyday life.